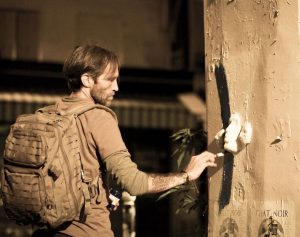 Unlike some, whose reputation is tainted by prejudice, Gregos adds a touch of colour to city walls with his moulded face masks! Let’s take a look back at the story of the Parisian ‘passe-muraille’ or ‘man who walks through walls’.

When he started tagging suburban walls, Gregos – as his mates have always called him – could not have imagined the artistic journey on which he was about to embark. Influenced by an emerging hip-hop culture ‘made in USA’, he was driven by an adrenalin-fuelled desire to express himself. The end of secondary school and military service brought this urban prelude to a close. However, Gregos, who continued working with his hands, went on to the next episode of his ‘plastic arts’ adventure.

The saga continues in Greece at the end of the ’90s, when thanks to professional obligations, Gregos had the opportunity to discover the treasures of Antiquity. The rich detail and realism of the sculptures had a life-changing effect on him. When he returned to France, Gregos began experimenting with clay and learnt sculpting techniques. He solved the problem of reproducing his work using moulds and began testing his first hand imprints in 2000. While living abroad in Boston from 2004 to 2006, Gregos continued his visual experiments and extended his technical expertise to oil and acrylic painting. He returned with his first moulded face mask in his baggage – a representation of the timid, mischievous child sticking out his tongue for family photos!

Back in Paris, Gregos settled in the Pigalle area, where he appreciated the artistic emulation despite suffering some of the consequences, such as the late-night conversations between students from the nearby music school. Gregos prefers humour to shouting, using visual expression to take a stand. The first face, installed in 2006, was white with a simple signature on the cheek. A second face, installed a few weeks later, led to a third… He relished the rush of excitement brought on by these outings which had become a habit by the end of 2007. Little by little, Gregos became part of the street art scene, meeting and then teaming up with different artists in collage sessions and other events.

This urban artist, who works by himself at night, is always on the lookout for the ideal spot, an uncluttered wall or an unusual location where he can create an offbeat and surprising work of art. Amongst those charmed by ‘the face in the wall’ were some journalists and gallery owners who offered to exhibit his work in 2008.

Experience generates ideas and in 2009, Gregos not only added colour to his face masks but also began to use different formats. His own face became the ideal medium for sharing his ‘Moods’. For this self-taught artist, whose face masks are moulded using a variety of different techniques learnt over time, this artform is an opportunity to tell an extraordinary ‘autobio-GRAPHICAL’ tale.

But naturally it is in Paris that Gregos’ ‘Moods’ are most prolific, with nearly 900 mural face masks to date, and nearly 2000 around the world.

Pursuing his love of ‘the face in the wall’ experience, Gregos is unwavering in his search for new ways to add something extra to his work. For example, Gregos currently produces versions of his art that are smaller than a coin. What’s more, he uses new materials to develop his art work: transparent crystal, luminous chrome and even the sophistication of bronze. This forms a link between the legacy of traditional sculpting and modern techniques. Drawing inspiration from his surroundings, current events, life and the street, Gregos never tires of using his medium like a mirror for sharing emotions.